Big verdicts happen when both Defendants and their lawyers/insurance companies do stupid things that anger Jurors and motivate them to inflict punishment.

It looks like that is exactly what happened in Marion County Tennessee where it took a local Jury just over a half hour to whack Cracker Barrel with a $9.4 Million Personal Injury Verdict.  (By the way, this was not one of my cases, although I wish it was!) 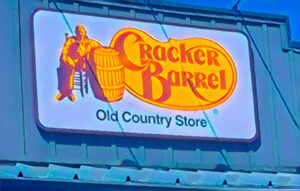 In April of 2014, William Connors was having lunch at Cracker Barrel when he took a sip of what he thought was water.  He quickly realized that it was not water because his mouth and throat began burning.

In reality, Mr. Connors had been served a toxic cleaning solution which had been put in an unmarked pitcher in the Cracker Barrel kitchen and had been mistakenly served to him by his waiter.

According to Court documents, Mr. Connors demanded $150,000 in compensation for his injuries but Cracker Barrel, its insurance company and Defense lawyers chose to fight the case in Court.  This led to an 8 year Court battle.

At the end of the Trial, the Jury deliberated for just over a half hour, awarding $4.4 Million of Compensatory Damages for Medial Bills, Lost Income and Pain and Suffering, and $5 Million in Punitive Damages to punish Cracker Barrel.

In my opinion, stupidity and anger drive large Jury Verdicts and this Cracker Barrel Case is just another example.

Cracker Barrel and its lawyers and insurance company were stupid.

How dumb is it to have clear toxic cleaning chemicals in an unmarked water pitcher in the Cracker Barrel kitchen? That’s 10 out of 10 stupid.  It’s foreseeable that such action could easily result in a catastrophic accident should a waiter mistake the pitcher of cleaning chemicals for a pitcher of drinking water.

Similarly, how dumb is it that Cracker Barrel’s lawyers and insurance company chose to defend this case and take it to trial rather than settling the case with Mr. Connors? They were destined to lose, so why put Mr. Connors through 8 years of litigation and risk a huge verdict?

In the end, Cracker Barrel and its lawyers were punished to the tune of $9.4 Million.

The only silver lining for them (and tragedy for Mr. Connors) is that Cracker Barrel and its insurance company won’t have to pay the full verdict because Tennessee has a statutory cap on Personal Injury Damage Awards which will limit Mr. Connors’ recovery.

Tim Rayne is a Personal Injury Lawyer with the Chester County Full-Service Law Firm MacElree Harvey.  For over 25 years, Tim has been helping injured accident victims understand their legal rights and receive fair compensation from insurance companies.  Tim has law offices in Kennett Square and West Chester, Pennsylvania.  Contact Tim at 610-840-0124 or trayne@macelree.com for a Free Consultation.