If you have, then you may agree with me that it’s partly sad, partly funny and mostly incredibly boring.

From the perspective of a Trial Lawyer, it’s always interesting to see other colleagues practice the craft. It’s easy to be critical and laugh at gaffs, but you’d be surprised at how hard it is to think quickly on your feet and be ready to you react to what is always an unpredictable process.

What’s With All of The Objections?

One of the most confusing and annoying things about a  trial are all of the objections that attorneys make.  Objections are made in order to prevent the jury from hearing evidence that is improper.

One of the most frequent objections that you will hear in a trial is a Hearsay Objection.

What is Hearsay and Why is it Prohibited?

So, what in the world is Hearsay anyway?

Hearsay is defined as “an out of court statement offered for the truth of the matter asserted.”  Hearsay can be oral testimony from a witness or it can be a document, like a letter or an email.

Hearsay is what someone else said or wrote who is not sitting on the witness stand testifying and the testimony or writing is being offered to show that what was said or written is actually a fact.

A Hearsay Objection usually will occur when the person on the witness stand begins to say that “so and so Told me….” or “so and so Said….”

Here Are Some Specific Examples of Hearsay

Assume Johnny Depp was trying to testify about a conversation that he had with one of the police officers who investigated a domestic violence report by Amber Heard and Johnny said: “The police officer told me that he looked at Amber and did not believe that there was any evidence that she had been hit by me.”

That particular statement would be Hearsay because Johnny is attempting to get into evidence what  someone else (the police officer) said for the purpose of proving the truth of that statement that there was no physical evidence that Johnny had been violent towards Amber.

Under those circumstances, it would not be fair to have that evidence introduced. It’s unreliable.  Johnny might be lying.  If Johnny’s lawyer wants to prove that point, he needs to call the actual police officer to testify rather than have Johnny testify as to what the police officer allegedly saw. The Hearsay Rule prevents this type of unfair evidence from coming in to the trial.

Similarly, if the police officer in this example wrote a report about his investigation of the domestic violence incident and wrote in the report that he did not believe that there was any physical evidence that Amber had been hit, that report could not be introduced into evidence because it is Hearsay. It’s a written document being offered to prove the truth of the statement contained in the document.  Again to prove that point Johnny’s lawyer has to call the police officer to testify and authenticate the report in court.

Another reason why Hearsay evidence, either oral or written, is not allowed is that the other side should have the opportunity to cross examine the actual witness in order to test the veracity of his or her statements. In my second example if the police report could come in to evidence on its own, Amber‘s lawyers would have no ability to conduct cross examination because you can’t cross examine a piece of paper.

So those are the bare-bones basics of the Hearsay Rule. It is designed to prevent unfair evidence from coming into a trial. As you might expect, there are several exceptions to the Hearsay Rule and I will discuss them in upcoming articles. 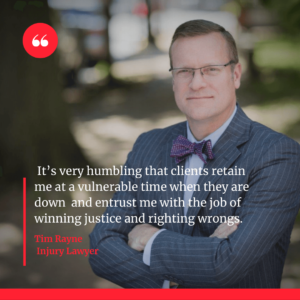 Tim Rayne is a Personal Injury Trial Lawyer with the Chester County Pennsylvania law firm MacElree Harvey, Ltd.  Tim has law offices in Kennett Square and West Chester.  For over 25 years Tim Rayne has been helping injured accident victims receive fair treatment from insurance companies.  Contact Tim at 610-840-0124 or trayne@macelree.com or check out his website at www.TimRayneLaw.com.