Having a Pennsylvania Car Accident Lawyer who is ready to take a case to trial can result in a fair car insurance settlement.

Why Wouldn’t Allstate and Progressive Settle?

It didn’t make sense.  Why wouldn’t the car insurance companies (Progressive and Allstate) offer a fair settlement after a rear-end car accident?

My client was hurt in a chain reaction double impact rear-end collision on Route 202 in Chester County.  She had stopped for traffic in a construction zone and was hit by another car from behind.  A few seconds later, she was hit again.

Clearly both of those drivers had been negligent for rear-ending her.  Surely their car insurance companies, Progressive and Allstate, would pay for the injuries and damages, wouldn’t they?

My client suffered from headaches, neck and shoulder pain.  She went to the doctor, took medication,  got physical therapy and chiropractic adjustments.  Her neck pain improved, but her shoulder pain migrated to her collar bone, causing difficulty with overhead movement and lifting.

She incurred medical bills and lost time from her second job as a bartender.  Her exercise routine and hobby of playing volleyball were impacted.  She even had difficulty dressing and undressing due to her injuries from the car accident.

Surprisingly the answer was no.  Arguing that the accident caused minimal damage to my client’s car and that she had Limited Tort (which is a bad idea – you should always carry Full Tort), Allstate offered $2,500 and Progressive offered $4,500.  This was much less than the client’s medical bills of $12,000 and lost income of $14,000!!!

Although the client desperately wanted to avoid going to trial, our response to the insulting offers was to immediately file a  lawsuit against both drivers and to aggressively prepare the case for trial.  We hired an expert witness, the client’s chiropractor, who was prepared to explain the client’s injuries to a jury.  The client, her husband, family members and friends were all lined up to testify in court.

It was two weeks before trial and we were fully prepared to go into battle and ask for fair treatment from a Chester County jury.

But then it happened.  Knowing that we were not going to back down and were willing to take our chances in court and have a Jury decide what was fair compensation, Allstate and Progressive finally took a realistic look at the case and realized that there was a risk of a significant jury verdict.

The defense attorneys hired by Allstate and Progressive finally negotiated in good faith and my client decided to settle the case rather than go to trial.  But, this time the offers were reasonable, resulting in the client feeling that she had been treated fairly.

The lesson to be learned from this case is that having a Pennsylvania Car Accident Lawyer who is willing to file a lawsuit and try your case, if necessary, is often the key to winning a fair car insurance settlement. 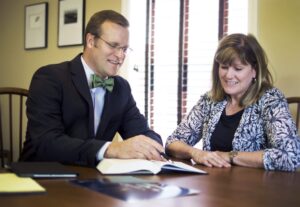 Tim Rayne is a Car Accident and Personal Injury Lawyer with offices in Kennett Square and West Chester Pennsylvania.  For over 20 years, Tim has been helping injured vicitms of accidents in Pennsylvania receive fair treatment from insurance companies.  For more information on how Tim Rayne can help you after a car accident, contact Tim at 610-840-0124 or trayne@macelree.com.