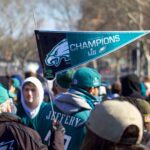 Assault at the Eagles/Cowboys Game

Most people know you are risking your life by wearing a Dallas Cowboys jersey to a Philadelphia Eagles game.

Apparently, Patrick Pearson did not and was assaulted and seriously injured as a result.

On December 14, 2014, Pearson attended the Eagles/Cowboys game at Lincoln Financial Field wearing a Number 8 Troy Aikman Cowboys jersey.  At halftime, Pearson went to the bathroom and as he stood in line at the urinals, the insults from Eagles fan started.  Unwisely, Pearson responded with the taunt “get a ring and we’ll talk” (referring to the fact that, at that time, the Eagles had no Superbowl wins while Dallas had several).

Soon thereafter, Pearson was on the ground being beaten and, during the altercation, he suffered a seriously broken and dislocated ankle which required two surgeries with the insertion of plates and screws and left him with pain and a limp.

Stadium security guards were not present in the bathroom but responded once they received word of the altercation.

Pearson filed a lawsuit against the Eagles, the company that operated the stadium and the security company for Negligence. Pearson claimed that the defendants failed to provide reasonable security in order to provide a safe environment for spectators and to prevent assaults on fans of visiting teams.  More specifically, Pearson alleged that it was negligent for the defendants to fail to have security guards present in the bathrooms when it knew altercations took place there.

After Trial, the defendants appealed claiming that they should have been dismissed from the case because there was insufficient proof of Negligence.

As the Plaintiff, Pearson had the burden of proving that the defendants were Negligent (careless) in the implementation of security and that the Negligence was the cause of his injuries.

A business owes its customers a duty of care to protect them from danger.  With regard to criminal assaults by third parties, businesses can be held liable for such harm if it was foreseeable based upon prior experience and if the business agreed to or voluntarily undertook efforts to prevent it and did so carelessly.

Pearson claimed that the defendants were Negligent because they knew about the danger of altercations in the bathrooms and yet failed to provide security personnel in the bathrooms.

Ultimately, the Superior court sided with the defendants and concluded that the evidence did not support the claim that assaults regularly occurred in the bathroom or that the defendants’ security operation was run carelessly.  Because of the lack of evidence, the  Superior Court found that the Trial Judge should not have permitted the jury to decide the case.  Instead the Trial Judge should have dismissed the case.  Accordingly the Superior Court struck down the $700,000 verdict.

Tim Rayne is a Personal Injury Lawyer with the law firm MacElree Harvey.  For over 25 years, Tim has been helping injured accident victims understand their legal rights and the insurance claim process.  Tim helps clients by negotiating settlements with insurance companies and litigating Personal Injury Cases.  Tim has offices in Kennett Square, West Chester and Philadelphia, Pennsylvania.  Contact Tim at 6108400124 or trayne@macelree.com for a Free Consultation.