It’s the weekend at The Masters Golf Tournament and Tiger Woods made the cut.  So, what if happens if Tiger hits an errant shot and seriously injures a Patron (yes they are called Patrons, not spectators)? Can the injured Patron file a lawsuit against the GOAT?

The simple answer is No, and this is based upon the legal defense of Assumption of the Risk.

If someone is injured by someone else’s conduct (like Tiger’s Shank in this example) there may or may not be legal liability on behalf of the perpetrator.

If the victim can prove Negligence/Carelessness on behalf of the perpetrator, there may be a legal claim for reasonable compensation for the harm.

However, in this situation, the Patron has Assumed the Risk of injury by attending the golf tournament.  Assumption of the Risk has two elements, knowledge of danger and voluntarily confrontation of the known danger.

In The Masters scenario, it is commonly known by golf spectators that golf in an inexact game and that errant shots frequently occur.  In addition, because of the layout of golf courses, it’s impossible to protect the spectators from injury from errant golf shots.  So, it’s known and understood that spectators may suffer an injury if they voluntarily choose to attend a golf tournament.

In addition to it being commonly known, the Ticket to The Masters contains explicit language providing that the Patrons understand and assume the risk of injury and release any potential claims.

Here’s what the Ticket says:

All risks associated with golf tournaments, including without limitation, being hit by a golf ball or golf club, stuck by lightning, and falling are assumed by ticket holder.  Tournament participants are released from any claims or liability arising from such causes.

Courts have held that provisions on the back of a ticket to an event are enforceable.

So, in our hypothetical, the injured Patron will have no legal claim against Tiger Woods.

The only silver lining is that there is an informal tradition that professional golfers who hit and injure Patrons will do something to try to make it up to them.  They commonly shake the person’s hand and give them a ball or autographed golf glove as a consolation prize. 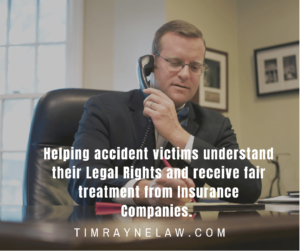 Tim Rayne is a Personal Injury Lawyer with MacElree Harvey, Ltd.  For over 25 years, Tim has been helping injured accident victims understand their legal rights and receive fair treatment from insurance companies.  Contact Tim at 610-840-0124 or trayne@macelree.com or check out his website at www.TimRayneLaw.com.